Are you looking to add some flavor to your meals? Our Cajun Shrimp Recipes are just the answer to liven up your dinner table.

Many people believe Cajun shrimp to be spicy hot. This is not always true.

Cajun cooking is created by the blend of flavors or seasonings used in recipes.

The most popular blend includes bell peppers, celery and onion. You can add “hot” peppers or spices to the blend to make the food spicy hot but many recipes do not do this. They are just flavorful with many seasonings.

Cajun cooking was derived from a group of settlers in Louisiana, called the Acadians. The Acadians had to live off the land and being near the Gulf Coast and many marshes this typically included the use of crawfish, oysters, fish and shrimp in their cooking. 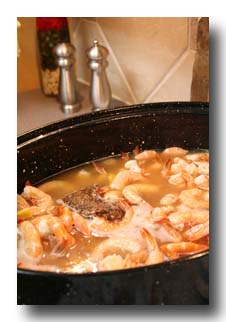 Popular variations of Cajun of cooking include Gumbo, Jambalaya and a Crawfish Boil. Creole is also often associated with Cajun Cooking. Gumbo a spicy stew typically related to Louisiana. It mainly consists of rice and broth along with the flavors or seasonings typical of Cajun cuisine. Then shrimp, or other ingredients are added to the stew. Jambalaya is a combination of cooked rice and a variety of other ingredients. It may include tomatoes, onion, green pepper, meat, poultry, and/or shellfish such as shrimp. A Crawfish boil is typically done by boiling crawfish, potatoes, onions and corn with seasonings such as lemons, bay leaves, mustard seeds, cayenne pepper and other spices. Shrimp is often used in conjunction with the crawfish or as a substitute.

We hope you enjoy this Shrimp Recipe collection that we have put together for you and if you have a favorite, please let us know.

Have a great Cajun Shrimp Recipe that your family can't live without, that you want to share?

Does your family have a tasty cajun shrimp recipe that's been passed down through the generations? Or, do you just have recipe that you think is the best one out there? We'd love to see it and so would our other visitors.Enter Your Favorite Cajun Shrimp Recipe here. It's Easy!Click here to see the rest of the form and complete your submission.

These are all Misc Cajun flavored Shrimp Recipes

Return to top of page